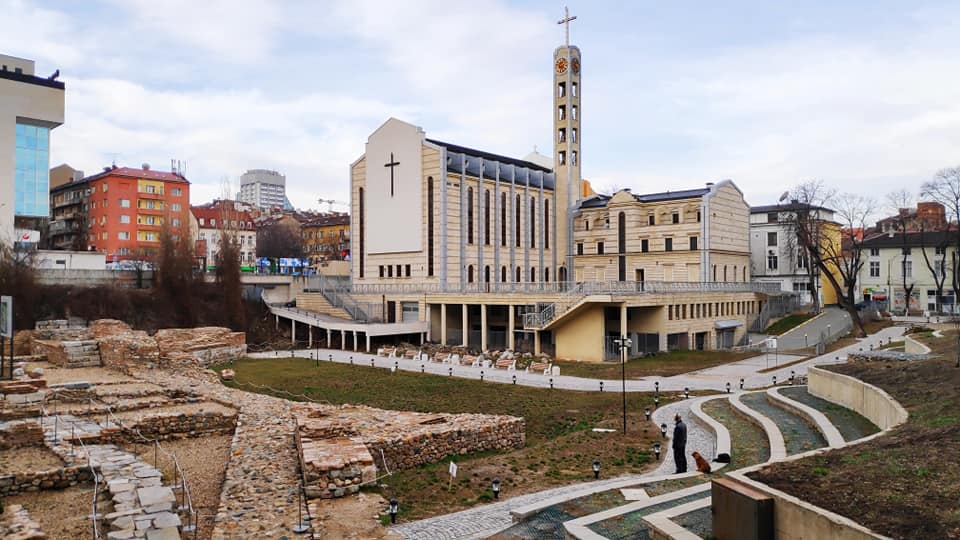 As the capital of a former communist country, Sofia has a number of imposing monuments and landmarks, that recall the long history of Bulgaria. At first sight, Sofia look a bit gray with the Communist - era buildings still dominating. During the World War II much of Sofia was destroyed and only part of it was reconstructed the way it used to look before and after the war. Everywhere you go, you will find an interesting building, monument or statues. Bulgarians are very proud of their history and culture and once you've visited the historical places, you will understand why. Read more, to find the best places to go in Sofia.

Central Military Club has been among the jewels of downtown Sofia for over a hundred years, it is located on Tsar Osvoboditel boulevard and Georgi Rakovski street. This monumental buildng was erected after the Liberation /1878/ and it is one of the finest examples of Post - Liberation architecture. Construction works started in 1895, as a stone relic of the Battle of Slivnitsa, part of the Serbo - Bulgarian war /1885 - 1886/. Completed in 1907, the building consists of three floors, two wings and three monumental towers. The Military Club was designed by Czech architect Anton Kolar in the Neo - Renaissance style and finished by Bulgarian architect Nikola Lazarov in 1907. The magnificient marble flooring of the halls and hallways and the ornate ceilings probably draw the lougest gazes from all visitors. The stylish terraces contribute to sophisticated and aristocratic atmosphere of the club. The Military Club was initially known as the Officer's Club and was used  for celebrations, balls and many other different events in Sofia's elite. 120 000 Library holdings and develops educational activities.

Amphitheatre in Serdica  was built around the 3rd - 4th century on a top pf 2nd - 3rd century theatre which had been ravaged by the Goths. The Amphitheatre of Serdica was among the biggest in the eastern part of the Roman Empire. In 1919 a stone plate - placard was discovered not far from the building of the Council of Ministers in Sofia. The remains of a large Roman Building were discovered 85 years later /in 2004/ during the ground survey for the Area Di Serdica hotel. Located outside the ancient city walls near the Eastern gate, the amphitheatre was an architectural ensemble with a central role in the life of Serdica. The combination of Roman theatre and a late-antique amphitheatre makes the finding unique and sensational. There are only 77 amphiteathers discovered all over the world by now. The Arena of Serdica was an oval and with its measures of 60 by 43 meters, it is only a few meters shorter than the Roman Coliseum. The theatre is restored in details so the walls are preserved in their original shape and the arena is covered with sand. Romans would use sand to cover the arenas where the gladiators battles take place, because back then this was best blood absorbing material known.

Eagle's Bridge known as Orlov most is located next to Vasil Levski national stadium, the monument to the Soviet Army, the Borisova gradina park and lakee Ariana, near Sofia University. The name of the bridge itself comes from the four statues of eagles on it which are the protectors and patrons. Eagle's Bridge was constructed in 1891 by Czech architect Vaclav Prosek, his brother Josef and his cousins. The overall cost of the bridge was 80 000 golden leva. Orlov most was a major focus of political protests in 2013, with scenes of violence during the winter protests, contrasted with massive but peaceful gatherings, during the summer protests. One of the Eagle's bridge columns and bronze eagles are depicted on the reverse of the Bulgarian twenty levs, issued in 1999 and 2007.

National Theatre ''Ivan Vazov'' is one of the most attractive building in the Bulgarian's capital - Sofia. People go there not only to enter the theatre and watch a play, but there are many other activities like playing chess, watch the fountains or just simply have a beer in the park. The Landmark is situated in the center of Sofia and it is easily accessible. The establishment of the theatre and the construction of the building followed the trends of cultural revival and development of Bulgaria in the end of 19th century. In 1923 during a play, a fire went off and destroyed the building. few years later it was reconstructed and supplied with modern stage equipment. Two decades after that, the building was partially damaged again after bombing during WWII. Nowadays, people enjoy not only the architecture of the building but also the amazing decorations and interior. The theater is still open and hosts some of the greatest performances almost every evening. If you see the big hall from inside, you could notice that all the seats are red except two that are yellow. One of them was the favorite seat of the Minister of Education, the other seat was taken by the person that is theater named after - Ivan Vazov. He used to be ''Patriarch of Bulgarian Literature''. 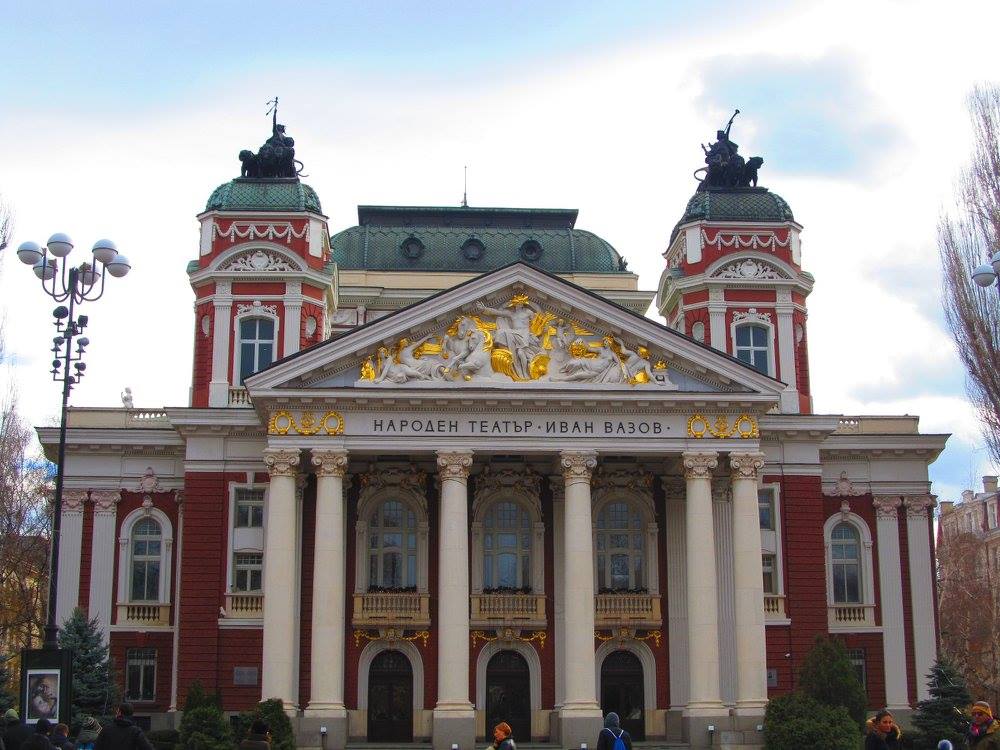 The Palace of Justice is located in the beggining of the pedestrian zone of Vitosha boulevard. The construction of the Palace of Justice /Sadebna Palata/ began in 1921 and finished in 1940. The facade features five large gates and 12 columns. The court house is electic building with Roman and Byzantine style decorations on the doors and windows. Two Lions statued proudly guard the entrance.

Lion's Bridge /Lavov Most/ is a bridge over the Vladaya River in the center of Sofia, built 1889 - 1891. The Bridge was built from stone at the place of an older bridge, called ''Sharen Most'', because it was decorated with red and yellow stripes. The name of The Lion's Bridge comes from the four bronze sculptures of Lions. All metal elements of the bridge were produced by Austrian company and electric lights were installed in the early 90s. The overall price of the construction of the bridge cost 260 000 golden levs. In 2014 a major reconstruction of the square was completed. The automobile traffic was removed from the bridge, reserving it only for trams and pedestrians.

The Largo is called a complex of buildings and architectural ensemble of Sofia's downtown, designed and built in the 1950s with the intention to become Sofia's new representative centre. Nowadays it is regarded as onne of the best examples of Socialist Classicism architecture in South-Eastern Europe and it is one of the main landmarks in Sofia. The buildings of Largo area are used from many national institutions as the Council of Ministers of Bulgarian, the President's Office, the Ministry of Education, but there are also commercial buildings, like hotels, restaurants, shops.

Central Mineral Baths - the base construction was completed in 1908 and the bath was opened to the public in 1911, but with separated facilities for men and women. The current building was constructed in 1913. It incorporates the Bulgarian interpretation of the famous Vienna succession architectural movements, with elements of Byzantine and Bulgarian revival architecture. The beautiful building of the Sofia's former mineral baths is now The Museum of Sofia, forming a backdrop to the beautiful park with a fountain where locals line up to fill up free hot mineral water in the park area. There are some benches in the gardden where you can sit and just enjoy the atmosphere. 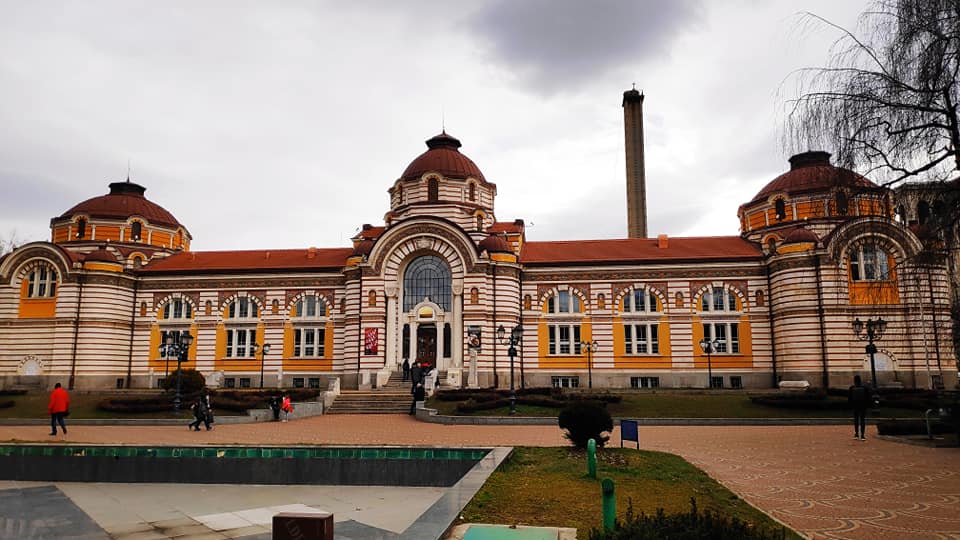 Except the list above there are many more beautiful historical buildings and landmarks that should be visited, like Council of Ministers, The former Communist Party House, Independence square, Presidency building, The Former Royal Palace, National Library, The Snail House, The Bridge of Lovers, etc. Sofia is a must - visit city with very rich history.

Book a private trip to Sofia. It doesn't matter the city you want to depart - Plovdiv, Varna, Burgas, Ruse, etc... We can arrange your one-day trip to this destination and many other in Bulgaria. If you choose our services you can be sure that you will have English-speaking driver, clean and air-conditioned car, which would make your vacation more pleasant and comfortable.